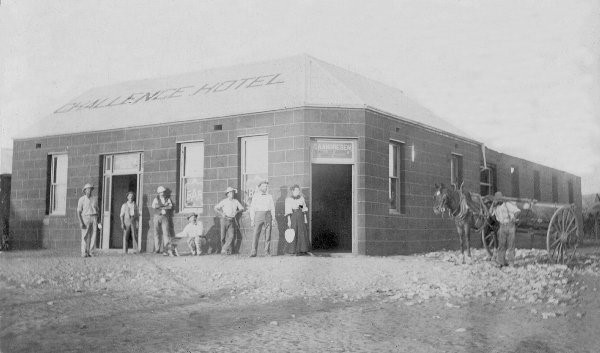 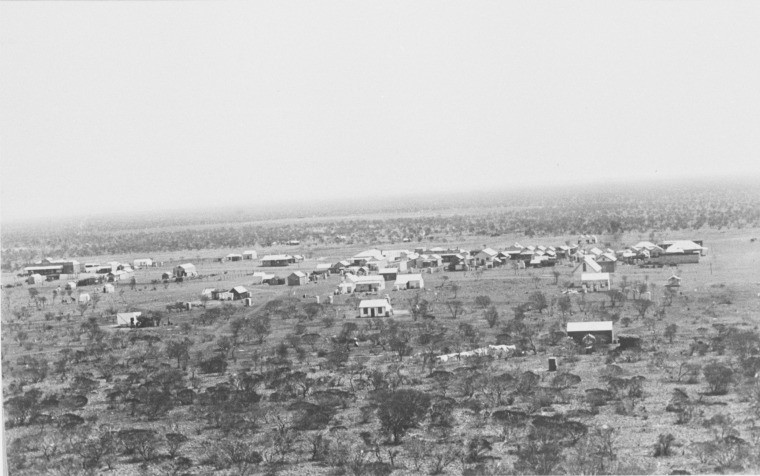 This small cemetery contains early settlers of this area. There are several unmarked graves.

Burial dates range from 1899-1902. There are several beautiful examples of iron headstones and fences.

The cemetery is situated within the airport precinct, so is not accessible to the public. The map marker is at the entrance to the airport.

The cemetery is no longer active, Leonora Cemetery on Memorial Drive is now the active Cemetery.

Leonora takes its name from a nearby distinctive conical hill some 420 m high, Mt Leonora.
This feature was named in 1869 by explorer and Government surveyor John (later Sir John and W.A.’s first premier) Forrest. In April 1869 the explorer passed through the area looking for the lost explorer, Ludwig Leichardt (who had disappeared in 1848). On 21 June 1869 Forrest's party made camp near a conspicuous hill which Forrest named Mount Leonora, after his six-year-old niece Frances (Fanny) or Phylis) Leonora Hardey. Unbeknown to Forrest, this prominent geographic feature was an ancient Aboriginal site of tremendous spiritual significance including association with the 'dreaming' of the 'Seven Sisters Sisters'.
During the years 1894 and 1895 it was reported that alluvial gold had been found in the area with prospectors Morrisey and Booden being named.
In March 1896 South African prospector Edward 'Doodah' Sullivan and his partner Harry Widdick pegged the Johannesburg lease having found gold 6 km from Leonora.
In May 1896 the Sons of Gwalia reef was discovered by prospectors named Carlson, White and Glendinning* and by September 1896 had attracted £300,000 of capital investment.

In December 1896 Warden Owen approved the establishment of the Leonora townsite
In 1897 more substantial buildings were soon constructed and a butcher’s shop, banking agency and post office were established, along with the Exchange Hotel which was transported from Fremantle in prefabricated sections.
The town grew quickly and the Leonora townsite was gazetted on 15th April 1898.
By 1899 there were three hotels, three bakeries, a wide variety of shops, a post office, police and fire stations, a school, banks, a Wesleyan church and a Cobb & Co service to Coolgardie.
On 8 July 1899 the weekly newspaper, the Mount Leonora Miner, distributed its first edition and was the longest-running newspaper in the region apart from the Kalgoorlie Miner.
Leonora also boasted a cordial factory, mechanics’ institute, a newspaper, a race course and a State battery to crush the mined ore.
On the 21st August 1900 the thriving settlement with a population of about 1,000 people, was proclaimed a municipality.

The project aimed to deliver an ambitious works program at Gwalia, including the conservation of Gwalia's Historic Precinct, Museum and Hoover House, reconstruction of the historic timber headframe and preservation of the Gwalia settlement's 22 traditional miners' cottages.
Gwalia Museum is now one of the most fascinating places in the Western Australian Northern Goldfields. Its main points of interest include the magnificent Gwalia State Hotel, a large open-cut mine, the old miners’ cottages and other commercial buildings, left by residents in December 1963 when the Sons of Gwalia Gold mine closed.
A very special attraction is Hoover House, now a guest house, but originally built in 1898 as a home for the mine manager. Herbert Hoover, who commissioned the house was later to become the 31st President of the United States of America. Hoover designed the Oregon head-frame, now a landmark at the Museum, it is believed to be the only wooden incline head-frame left in Australia. The museum also houses the country’s largest steam winder (1000 hp), which was imported from England in 1912, as well as ‘Midland’, a woodline steam engine that carted over 30,000 tonnes of firewood a year to fire the boilers at the Sons of Gwalia Mine.

Leonora Tramway
Leonora, a small mining town about 235 kilometres to the north of Kalgoorlie, has a most unusual tramway history, beginning in 1901 with a privately operated steam tram system
In 1902 the local council took over the system and commenced running a steam service to the nearby town of Gwalia in 1903.
An electric power station opened in the town in 1907 and an electric tram service began in November 1908.
In 1915 the power station burnt down and the electric tram service ceased. It was replaced by a petrol-driven motor tram, which ran until 1921 when the tramway closed.