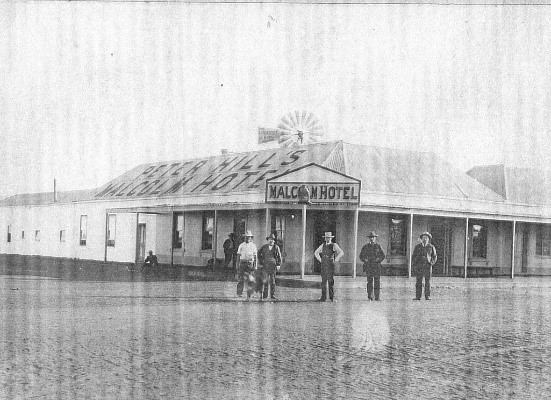 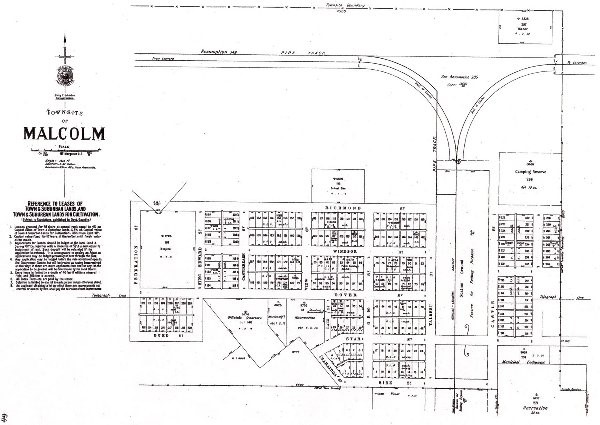 Region: Goldfields-Esperance
Coordinates: -28.9836111, 121.5027778
Directions: 19 km south-east of Leonora, south of the Leonora – Laverton Road along the Malcolm Kookynie road. Malcolm town site is itself nothing these days than a bare area of flat ground. Bordering the former town site on the east now is a modern railway siding.

There are two cemeteries at Malcolm; Malcolm Salt Lake aka Raeside 1897 – 1922 and Malcolm Kookynie Road Cemetery. The Malcolm Salt Lake cemetery (Raeside) was superseded in 1910 by the establishment of the Malcolm Kookynie Road cemetery gazetted on 25 November 1910 with an area of five acres. The last burial here was in 1915 after which burials took place in the Leonora Cemetery.

Mt Malcolm, was named by John Forrest in 1869 after his friend and fellow explorer Malcolm Hamersley.
The original gold discovery at Malcolm is said to have been before even Bayley's famous discovery at Coolgardie. Gold was found at Malcolm by Speakman and Ryan (surnames). They chipped some rich stone from the outcrop and then left without pegging a lease. Birks and party pegged the first lease here in 1895 but did little with it. G.W. Hall came to own the lease around 1897, with a company called the North Star Gold Mining Company subsequently floated in London, with 20 head mill and cyanide plant installed.
In 1896 there were 6 stores, three hotels and two bakeries. After application Malcolm (after Mt Malcolm) was gazetted in 1897 as the original administrative centre for the Northern Goldfields. The Lands Dept wanted to call the town Taalberoo.

Although Malcolm never became a boom town the Mine Warden was based there and it was a busy railway yard. By 1897 there were 3 hotels, 6 stores, 2 bakeries and a butcher.
By 1900 the town was incorporated and had kerosene street lights and a swimming pool. In 1902 it became a railway junction but also that year the warden’s office was moved to Mt Morgans. In 1903 there were over 200 buildings in the town and a population of 450. In 1904 there were 5 hotels and a brewery with the population declining to 400, the hospital was under threat and the newspaper closed in 1905.

The North Star Mine lying a little southwest of the Malcolm town site was the main mine for the town. In 1905 this mine was taken over by the Malcolm Prospecting Syndicate owned by a group of local businessmen in an effort to provide employment and keep the town alive. The mine closed in 1916 and the town quickly closed.
By 1925 only 29 people lived at Malcolm with no miners working in the area.

The North Star Gold Mine lies a little southwest of the former Malcolm town site. Little remains at the North Star site other than some minor remnant battery sands and a few shafts.

In 1946, the Maund brothers erect a 5-head battery on the foundations of the old 10-head mill from decades earlier, a cyanide plant of two cement vats, planning to treat the sands, and access any gold left behind in the old workings. The mine is said over its history to have achieved approximately 26 000 tonnes of ore for 15 000 ounces of gold at 11 dwt.