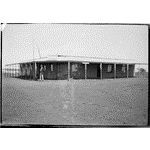 Region: Goldfields-Esperance
Coordinates: -27.518333, 120.56
Directions: Along the Goldfields Highway, about 50 ks north of Leinster

Gold was discovered in the area in 1897 and a town site was gazetted in 1900. Though the locals referred to the town as Kathleen Valley because gold had been found in a nearby valley the naming officer dropped the Valley part of the name

In 1901 there was a shop and a butcher and by 1902 two hotels the Yellow Aster (photo above and named after the main gold mine) and the Kathleen Valley. In later years copper was discovered and both it and gold were mined.

February 13, 2020. Liontown Resources (ASX: LTR) has unveiled an updated resource for its Kathleen Valley lithium project in Western Australia, with the new resource representing an 86% increase on the previous estimate. The new resource for Kathleen Valley now totals 139 million tonnes at 1.3% lithium and 140 parts per million tantalum. This is expected to generate 1.8Mt of lithium or 4.5Mt of lithium carbonate equivalent and 43 million pounds of tantalum.