Burtville 2008: All that remains of the town today is the entrance door archway of one of the town's hotels. 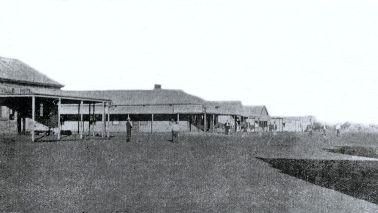 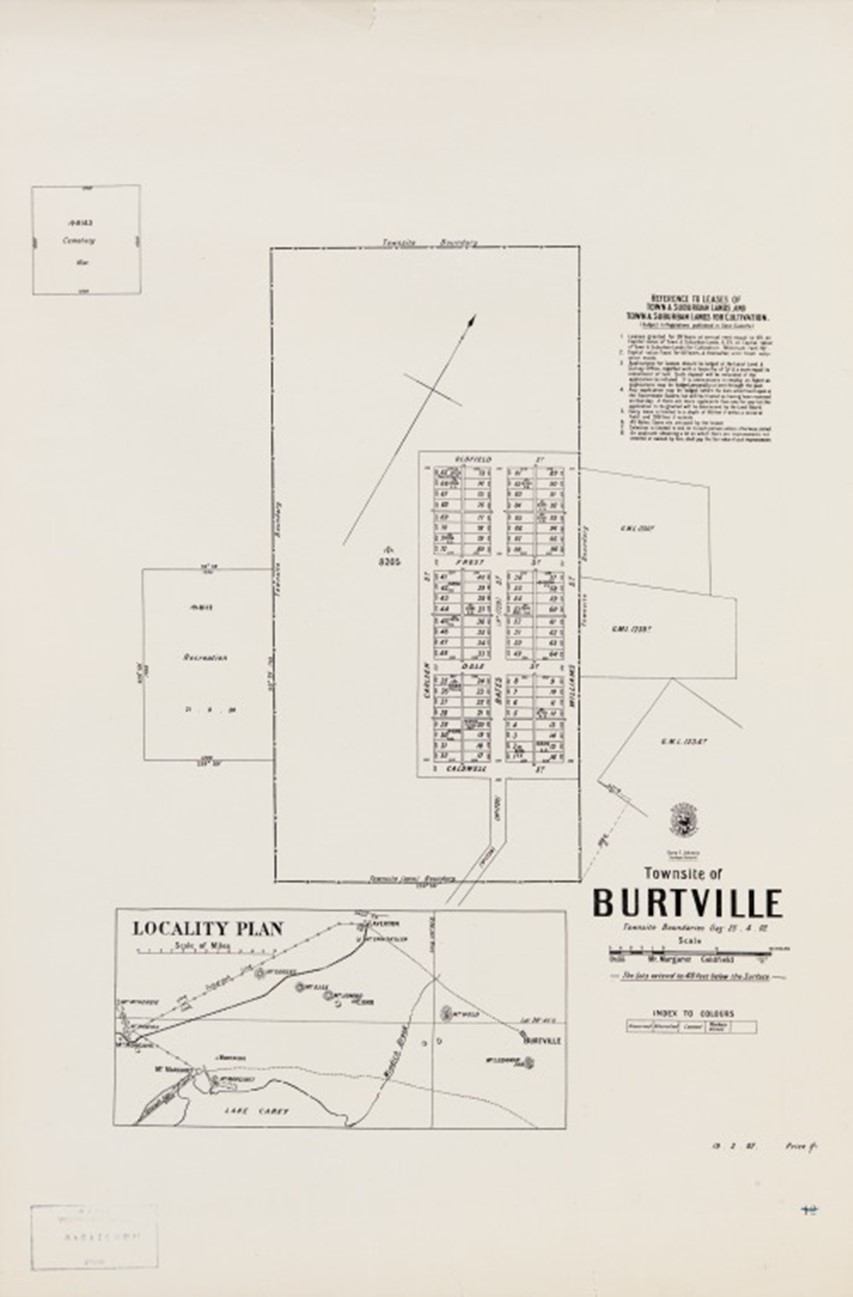 The town was gazetted Merolia (a local indigenous word for the area) in 1902 but soon after, it was re-named Burtville after the Mount Margaret Goldfield Chief Mining Warden, Archibald Edmund Burt, grandson of the first chief justice of the Western Australian Supreme Court, Sir Archibald Burt.

Gold was discovered in the area by Billy Frost and James Tregurtha in 1897. They pegged the Nil Desperandum and Wanderer leases. The first they gave away and subsequent parties obtained 100,000 pounds money-wise of gold from it. Meanwhile, Frost and Tregurtha worked the Wanderer lease for two years for little result.

The population of the town and district rose to approximately 400 by 1903 as a result of gold mining. The town also had a water supply from a government well and a sealed pan sanitation system. A police station was opened in 1903 along with a school and two hotels. A ten-stamp state battery and five-stamp battery known as The Burtville Ore Reduction Works were operated within the town from 1903 to 1906. Another privately owned ten-stamp battery that allowed public access, known as The Sons of Westralia, was also operating at the time. By 1916, the population had reduced to 45 and the police station was closed.

WESTERN AUSTRALIA DIED WITH THEIR BOOTS ON

BACK on the Mount Margaret Goldfields of W.A., about 20 miles from the edge of the Great Australian Desert, lies the little mining camp of Burtville, which has a record that no other on earth can boast. In its cemetery lie the remains of 42 hardy battlers, each of whom died with his boots on, victims of murder, suicide, or accident.

WHEN Coolgardie got too civilised for the prospectors they shifted to Hannan's. Soon they were on the move again. Civilisation kept on their heels until they found sanctuary in what was known later as Burtville, hundreds of miles away from humankind. The only means of getting there was having camels or packhorses. There was a real battlers' paradise, numerous small but rich reefs, ranging in gold value from three to fifteen ounces a ton. The digging was soft and no explosives were required to get the ore for a considerable depth. Soon a small army was at work raising ore. Then came the problem of getting it crushed, with no battery within reasonable carting distance. When things looked hopeless, Jim Thomas, who was usually among the first arrivals on new finds, thought of a scheme. He knew of a five-head battery that had been carted out into the bush same years earlier from Coolgardie to a mythical mine that had been floated in London. This mine, described as being northeast of Coolgardie, was said to consist of a small mountain in the shape of a castle, half gold. Shares went high in London and a five-head stamp battery was sent out and landed in Coolgardie. A man came out from London to erect and manage the plant. He knew his job and engaged four wagon teams to cart the machinery out at £200 a ton, with instructions to dump it. The teamsters faithfully carried out their contract, and the company faded into oblivion like many others in boom days. Jim Thomas hated to think of this battery resting in the bush when it could be put to good use among the Battlers at Burtville. An intensive search resulted in its location and it was brought to Burtville and used by the battlers. Soon the usual crowd came along and a shanty was set up. It was run by the wife of an English army captain, an Amazon with finger grips that would have made the hair of Samson's head stand on end. She could tear a pack of cards across, and did when the occasion called for firmness. The shanty soon became the evening meeting place of the fossickers, who would play euchre for drinks until bunk time. On the tick of 11 p.m., the hostess would declare the player who was in front the winner. If any protested she would give them a look as steely as the armour plate of a battleship, and picking up the pack of cards, would rip it across, declaring the play finished for the night, and no one argued the point further. When gold and cash began to be plentiful, civilisation haunted the fossicker again. A surveyor was sent along, to lay out a township and cemetery. Two hotel licenses were granted, and the pubs were declared opened by the licensees before their buildings were started. Beer flowed freely. The fossicker is a hard liver, a hard worker, and a hard drinker when he has the cash. The surface fossicker does not know much about underground working. When they got down a little the ground became harder and the fate of the inexperienced started to take its toll. Some were blown to pieces, others buried with falls of earth. One day the camp was startled by the news that a miner had been shot dead by another at a card table in the shanty. Later, another shot his mate and explained that he had mistaken him for a kangaroo in the bush. As the gold gave out and cash got short, many found the world so hard that they decided to leave it. The quick way was to tie a stick of dynamite with a detonator and short fuse against the side of the head and apply a match. Others could not endure the suspense of waiting for the fuse to burn down to the detonator. They took cyanide. Another was struck by lightning. In various ways, they all found their way to the cemetery - every man Jack - a victim of violence. It was not long before they had it all to themselves.